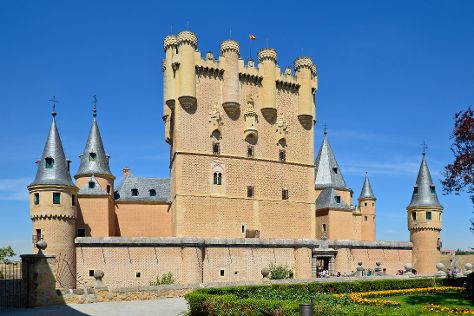 As one of Spain’s most well-preserved medieval cities, Segovia is known for its 1st-century Roman aqueduct that runs through the city center.

On the 2nd (Wed), don't miss a visit to La Muralla de Segovia, wander the streets of Old City, take in the spiritual surroundings of Catedral de Segovia, then brush up on your military savvy at Alcazar of Segovia, and finally make a trip to Acueduct of Segovia. Get ready for a full day of sightseeing on the 3rd (Thu): pause for some serene contemplation at San Martin Church, admire the striking features of Basilica de San Vicente, explore the ancient world of The Walls of Avila, then take in the spiritual surroundings of Catedral de Avila, and finally take in panoramic vistas at Torre-campanario de la Catedral.

Find out how to plan Segovia trip without stress by asking Inspirock to help create an itinerary.

Melbourne, Australia to Segovia is an approximately 26-hour flight. Due to the time zone difference, you'll gain 9 hours traveling from Melbourne to Segovia. Traveling from Melbourne in December, you will find days in Segovia are colder (11°C), and nights are slightly colder (3°C). Finish your sightseeing early on the 3rd (Thu) to allow enough time to take a train to Salamanca.
more less

Things to do in Segovia

Avila
Highlights from your plan

Salamanca is one of the most visited cities in Spain.

Discover out-of-the-way places like Ieronimus and Ciudad Vieja de Salamanca. Get out of town with these interesting Salamanca side-trips: Valladolid (Museo Nacional de Escultura, Plaza Mayor de Valladolid, &more). There's still lots to do: don't miss a visit to Plaza Mayor, admire the masterpieces at Museum of Art Nouveau and Art Deco Casa Lis, contemplate the long history of Escuelas Menores, and take in the views from Puente Romano.

Take a train from Segovia to Salamanca in 2 hours. Alternatively, you can drive; or take a bus. Plan for slightly colder nights when traveling from Segovia in December since evenings lows in Salamanca dip to -1°C. Cap off your sightseeing on the 7th (Mon) early enough to go by car to Porto.
more less

Things to do in Salamanca

Valladolid
Highlights from your plan

Called "Oporto" by many, the city of Porto along the Duoro River lent the country and Port wine their names. Portugal's second-largest metropolis dates back to the 4th century, representing both a rich cultural past and industrial present through its architecture and style.

Discover out-of-the-way places like Food Tours and Torre dos Clerigos. Explore the numerous day-trip ideas around Porto: Centro Historico de Guimaraes (in Guimaraes) and Bom Jesus do Monte (in Braga). Dedicate the 8th (Tue) to wine at some of the top wineries in the area. Next up on the itinerary: do a tasting at Graham's Port Lodge, explore the world behind art at Museu Serralves, snap pictures at Ponte de Dom Luis I, and take in the local highlights with Walking tours.

To find other places to visit, more things to do, reviews, and more tourist information, use the Porto trip itinerary site.

Things to do in Porto

Built on seven hills, Lisbon has experienced a renaissance in recent years, making it the cultural star of Portugal.

For reviews, where to stay, other places to visit, and more tourist information, read Lisbon journey planner.

Traveling by flight from Porto to Lisbon takes 3 hours. Alternatively, you can drive; or take a train. In December, daytime highs in Lisbon are 18°C, while nighttime lows are 8°C. Wrap up your sightseeing on the 18th (Fri) to allow time to travel to Seville.
more less

Things to do in Lisbon

A city of rich Moorish heritage, Seville is the cultural and financial center of southern Spain, and the site of numerous festivals throughout the year.

Explore hidden gems such as Barrio Santa Cruz and Basilica de la Macarena. Explore the numerous day-trip ideas around Seville: Cadiz (Yacimiento Arqueologico Gadir, Torre Tavira, &more) and Gruta de las Maravillas (in Aracena). There's much more to do: wander the streets of Centro Historico de Sevilla, explore the world behind art at Museo De Bellas Artes De Sevilla, admire the natural beauty at Casa de Pilatos, and indulge in some personalized pampering at some of the best spas.

To find traveler tips, ratings, other places to visit, and more tourist information, you can read our Seville tour planner.

Things to do in Seville

Andalucía’s thousand-year-old city, Córdoba, was once the capital of both the Roman Empire and the Moorish Kingdom, representing an alluring mix of cultural and political history.

On the 24th (Thu), take an in-depth tour of Palacio de Viana, then don't miss a visit to Patios de Cordoba, and then savor the flavors at Food & Drink. Keep things going the next day: contemplate in the serene atmosphere at Mezquita Cathedral de Cordoba, snap pictures at Roman Bridge, then wander the streets of Jewish Quarter (Juderia), and finally don't miss a visit to Historic Centre of Cordoba.

To find maps, more things to do, other places to visit, and other tourist information, read our Cordoba holiday builder website.

Traveling by train from Seville to Cordoba takes 1.5 hours. Alternatively, you can drive; or take a bus. Plan for slightly colder nights when traveling from Seville in December since evenings lows in Cordoba dip to 4°C. Wrap up your sightseeing on the 25th (Fri) early enough to take a train to Ronda.
more less

Things to do in Cordoba 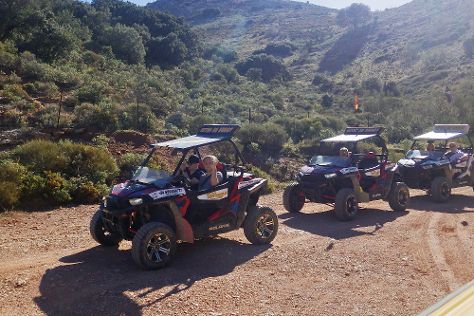 Renowned for its deep gorge, the quaint, whitewashed village of Ronda has preserved its charm as an Andalusian country village.

Explore hidden gems such as Puente Nuevo and El Caminito Del Rey, El Chorro. Next up on the itinerary: take in breathtaking views at El Tajo de Ronda, get great views at Mirador Paseo Blas Infante, do a tasting at Bodega Garcia Hidalgo, and see the interesting displays at Museo Lara.

Traveling by train from Cordoba to Ronda takes 2.5 hours. Alternatively, you can drive. In December, daytime highs in Ronda are 19°C, while nighttime lows are 7°C. Wrap up your sightseeing on the 31st (Thu) early enough to drive to Malaga.
more less

Things to do in Ronda

Capital of the Costa del Sol

Modern yet historic, Málaga is a lively city famous for being the birthplace of Pablo Picasso.

You'll explore the less-touristy side of things at Wine Tours & Tastings and Puerto de Málaga. You'll find plenty of places to visit near Malaga: Marbella Old Town (in Marbella), Balcony of Europe (in Nerja) and Parque De La Paloma (in Benalmadena). There's still lots to do: let your taste buds guide you at a local gastronomic tour, examine the collection at Museo del Vidrio y Cristal de Malaga, stroll around Parque La Bateria (Battery Park), and learn about wildlife with up-close encounters at Bioparc.

To see where to stay, reviews, more things to do, and more tourist information, go to the Malaga holiday tool.

You can drive from Ronda to Malaga in 2 hours. Alternatively, you can take a bus; or take a train. In December, plan for daily highs up to 20°C, and evening lows to 9°C. Cap off your sightseeing on the 5th (Tue) early enough to go by car to Granada.
more less

Things to do in Malaga

Granada boasts numerous well-preserved examples of exquisite Moorish architecture, not the least of which is the Alhambra, an ancient citadel and royal palace.

You'll discover tucked-away gems like Plaza de San Nicolas and Sinagoga del Agua. Venture out of the city with trips to Fundación Cueva de Nerja (in Nerja) and Jaén Cathedral (in Jaen). There's still lots to do: take in the spiritual surroundings of Royal Chapel of Granada, soak away your stress at Hammam Al Andalus Granada, take a stroll through Albayzin, and take in the local highlights with Walking tours.

For photos, traveler tips, and more tourist information, use the Granada trip planner.

Getting from Malaga to Granada by car takes about 2 hours. Other options: take a bus; or take a train. Expect slightly colder temperatures when traveling from Malaga in January; daily highs in Granada reach 14°C and lows reach 2°C. Finish your sightseeing early on the 10th (Sun) to allow enough time to drive to Alicante.
more less

Things to do in Granada

To see reviews, other places to visit, where to stay, and tourist information, you can read our Alicante trip planner.

You can drive from Granada to Alicante in 3.5 hours. Other options are to fly; or take a bus. In January, Alicante is somewhat warmer than Granada - with highs of 20°C and lows of 7°C. Finish your sightseeing early on the 14th (Thu) to allow enough time to drive to Valencia.
more less

Explore hidden gems such as Food Tours and Palacio del Marques de Dos Aguas. When in Valencia, make a side trip to see Peniscola Castle in Peniscola, approximately Peniscola away. There's lots more to do: contemplate in the serene atmosphere at Basílica de la Mare de Déu dels Desemparats, get a sense of history and politics at Central Post Office (Edificio de Correos y Telegrafos), steep yourself in history at Valencia Cathedral, and don't miss a visit to Plaza del Mercado (Placa del Mercat).

Traveling by car from Alicante to Valencia takes 2 hours. Alternatively, you can take a train; or take a bus. In January, daytime highs in Valencia are 20°C, while nighttime lows are 6°C. Wrap up your sightseeing on the 19th (Tue) to allow time to drive to Zaragoza.
more less

Things to do in Valencia 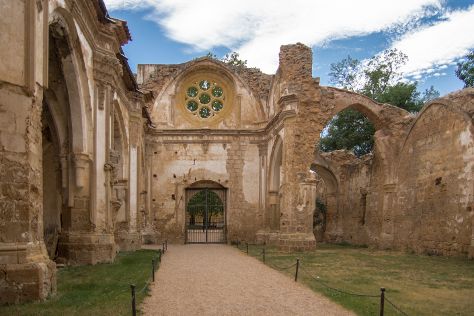 The city of Zaragoza is known as the City of Four Cultures for its interwoven history of Iberian, Roman, Moorish, and Christian influences.

Kick off your visit on the 20th (Wed): don't miss a visit to El Tubo and then take in the architecture and atmosphere at Monasterio de Piedra. On your second day here, appreciate the history behind Palacio de la Aljaferia, make a trip to Plaza del Pilar, then steep yourself in history at Basilica de Nuestra Senora del Pilar, and finally contemplate in the serene atmosphere at Catedral del Salvador de Zaragoza.

For other places to visit, photos, ratings, and tourist information, you can read our Zaragoza holiday builder.

Drive from Valencia to Zaragoza in 3.5 hours. Alternatively, you can take a train; or take a bus. Traveling from Valencia in January, expect nights in Zaragoza to be about the same, around 3°C, while days are a bit cooler, around 14°C. Wrap up your sightseeing on the 21st (Thu) to allow time to take a train to Barcelona.
more less

Things to do in Zaragoza

Historic Sites
Highlights from your plan

Discover out-of-the-way places like Food Tours and Walking tours. Change things up with these side-trips from Barcelona: Dali Theatre-Museum (in Figueres) and Santa Maria de Montserrat Abbey (in Montserrat). The adventure continues: admire the landmark architecture of Basilica of the Sagrada Familia, make a trip to Casa Batllo, stroll around Parc de Montjuic, and take a stroll through El Barri Gòtic.

Traveling by train from Zaragoza to Barcelona takes 2 hours. Alternatively, you can drive; or take a bus. Expect a bit warmer evenings in Barcelona when traveling from Zaragoza in January, with lows around 7°C. Wrap up your sightseeing by early afternoon on the 28th (Thu) to allow enough time to travel back home.
more less