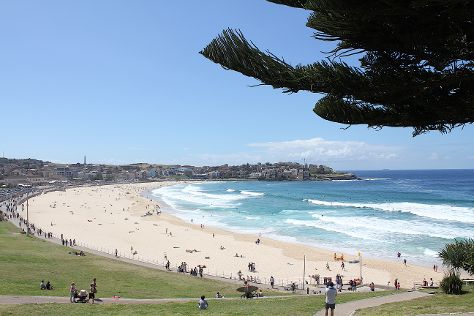 Lent iconic status as a result of its famous bridge and opera house, Sydney has a down-to-earth charm that enhances its spectacular setting and functional efficiency.

Get a sense of the local culture at Sydney Opera House and Darling Harbour. Get some historical perspective at The Rocks and The National Pass. You'll find plenty of places to visit near Sydney: Wentworth Falls (in Wentworth Falls), Leura Mall (in Leura) and Shelly Beach (in Manly). There's still lots to do: hunt for treasures at Sydney Fish Market, admire the natural beauty at Royal Botanic Garden Sydney, enjoy the sand and surf at Bondi Beach, and tour the pleasant surroundings at Manly Beach.

For ratings, where to stay, maps, and tourist information, read Sydney route tool.

Paphos, Cyprus to Sydney is an approximately 24-hour combination of bus and flight. You can also fly. The time zone changes from Eastern European Standard Time to Australian Eastern Standard Time, which is usually an 8 hour difference. Traveling from Paphos in December, things will get a bit warmer in Sydney: highs are around 32°C and lows about 21°C. Finish your sightseeing early on the 24th (Fri) to allow enough time to travel to Gold Coast.
more less

Things to do in Sydney

A city of towering skyscrapers, sandy beaches, and tree-lined streets, Gold Coast has an unpretentious air complemented by a citywide focus on sports and the arts.

Get in touch with nature at Watersports Guru and Surfers Paradise Beach. Give yourself a bit of retail therapy at Tweed Regional Gallery & Margaret Olley Art Centre and Noosa Chocolate Factory. Step out of Gold Coast with an excursion to Lone Pine Koala Sanctuary in Brisbane--about 1h 20 min away. There's much more to do: admire nature's wide array of creatures at Sea World Theme Park, kick back and relax at Burleigh Heads Beach, browse the fresh offerings at Sanctuary Markets, and explore the wealth of natural beauty at Burleigh Head National Park.

To find reviews, ratings, other places to visit, and other tourist information, use the Gold Coast trip itinerary planner.

Fly from Sydney to Gold Coast in 3.5 hours. Alternatively, you can drive; or take a bus. Expect a daytime high around 32°C in December, and nighttime lows around 22°C. Wrap up your sightseeing on the 29th (Wed) early enough to travel to Cairns.
more less

Things to do in Gold Coast

The Gateway to the Great Barrier Reef

A neat, cosmopolitan city of shaded plazas and laid-back neighborhoods, Cairns serves as a popular base for exploration of the surrounding region and the Great Barrier Reef, as well as a center for watersport activities like surfing or waterskiing.

Relax by the water at Trinity Beach and Ellis Beach. Kids will enjoy Scuba & Snorkeling and Opal Reef. You'll find plenty of places to visit near Cairns: Hartley's Crocodile Adventures (in Wangetti), Palm Cove Beach (in Palm Cove) and Mulgrave Settlers Museum (in Gordonvale). Next up on the itinerary: hike along Esplanade Boardwalk, get great views at Flagstaff Hill Lookout, view the masterpieces at Doongal Aboriginal Art Gallery Cairns, and make a splash at Sugarworld Waterpark.

Plan my Cairns trip by asking Inpirock to come up with tips and suggestions.

Traveling by flight from Gold Coast to Cairns takes 4.5 hours. Alternatively, you can drive; or take a train. In December, Cairns is a bit warmer than Gold Coast - with highs of 36°C and lows of 26°C. Cap off your sightseeing on the 4th (Tue) early enough to travel back home.
more less

Things to do in Cairns