The cultural, economic, and political center of the country, Vienna has developed from its early Celtic and Roman roots into a medieval and Baroque city, with an old town that was designated a World Heritage Site in 2001.

Schonbrunn Palace has been added to your itinerary. Step off the beaten path and head to Maria Theresia Denkmal and Kaiserliche Schatzkammer Wien. You'll visit kid-friendly attractions like Schönbrunn Zoo and Belvedere Palace. When in Vienna, make a side trip to see Die Perchtoldsdorfer Heide in Perchtoldsdorf, approximately Perchtoldsdorf away. And it doesn't end there: pause for some serene contemplation at St. Stephen's Cathedral, pause for some photo ops at Denkmal Kaiser Josef II., admire the landmark architecture of State Hall of the Austrian National Library, and don't miss a visit to Ringstrasse.

To find more things to do, traveler tips, maps, and more tourist information, go to the Vienna trip planner.

Bengaluru, India to Vienna is an approximately 15-hour travel. You can also fly; or drive. The time zone difference moving from India Standard Time (IST) to Central European Standard Time (CET) is minus 4.5 hours. In September, Vienna is a bit cooler than Bengaluru - with highs of 24°C and lows of 13°C. You will have some time to spend on the 5th (Sat) before leaving for Colmar.
more less

Things to do in Vienna 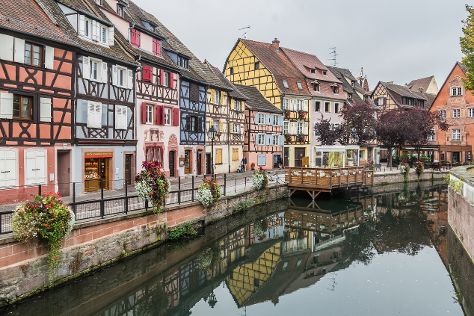 Situated along the Alsatian Wine Route, Colmar is renowned for its German and French culture, well-preserved old town, numerous architectural landmarks, and its museums.

You've now added Little Venice to your itinerary. Bring the kids along to Musée d'Unterlinden and Route des Cretes. Get outdoors at Le Hohneck and Boat Tours & Water Sports. Next up on the itinerary: admire the striking features of Salle du Corps de Garde, contemplate the long history of Maison Schongauer, don't miss a visit to Domaine Viticole de la Ville de Colmar, and go for a walk through Grand Rue De Colmar.

For where to stay, more things to do, ratings, and other tourist information, read Colmar trip itinerary builder tool.

Traveling by flight from Vienna to Colmar takes 5.5 hours. Alternatively, you can do a combination of flight, shuttle, and train; or drive; or take a train. In September in Colmar, expect temperatures between 25°C during the day and 11°C at night. Finish up your sightseeing early on the 7th (Mon) so you can travel to Athens.
more less

Things to do in Colmar

The Birthplace of Democracy

One of the world's most ancient cities, Athens remains Europe's undisputed historical and cultural capital.

You'll explore the less-touristy side of things at Temple of Hephaestus and Ancient Agora of Athens. Kids will appreciate attractions like Acropolis of Athens and Erechtheion. There's still lots to do: take an in-depth tour of Acropolis Museum, admire the masterpieces at Benaki Museum, take a stroll through Anafiotika, and don't miss a visit to Tomb of the Unknown Soldier.

To find more things to do, photos, maps, and tourist information, refer to the Athens trip builder app.

Traveling by journey from Colmar to Athens takes 7.5 hours. Alternatively, you can do a combination of train, shuttle, and flight; or drive; or do a combination of train, ferry, and bus. The time zone changes from Central European Standard Time to Eastern European Standard Time, which is usually a 1 hour difference. Prepare for somewhat warmer weather when traveling from Colmar in September: high temperatures in Athens hover around 34°C and lows are around 24°C. On the 11th (Fri), you'll have the morning to explore before heading off to Tbilisi.
more less

Things to do in Athens

On the bank of the Mtkvari River and at the foot of Trialeti mountain range, Tbilisi's location has given the city strategic significance since it was founded in the 5th century.

Visiting Nature & Wildlife Tours and Balloon Rides will get you outdoors. You'll explore the less-touristy side of things at Museum of Illusions and Legvachtahvi Gorge. When in Tbilisi, make a side trip to see The City-Museum Reserve of Mtskheta in Mtskheta, approximately Mtskheta away. The adventure continues: admire the masterpieces at Art Palace of Georgia-Museum of Cultural History, take in the architecture and atmosphere at Anchiskhati Basilica, appreciate the history behind Sculpture Group Berikaoba, and get great views at Memorial History of Georgia.

To see where to stay, more things to do, traveler tips, and other tourist information, use the Tbilisi trip builder website.

Things to do in Tbilisi

The City-Museum Reserve of Mtskheta
Highlights from your trip
©
Must see
Nature & Wildlife Tours 4.6
©
Skydiving
FlyZone Paragliding in Georgia 5.0
©
Must see
Museum of Illusions 4.7
See timeline