A trip to San Jose, the capital, commercial center, and cultural hub of Costa Rica, gives you a chance to experience the lively atmosphere and rich cultural past of this vibrant country.

Start off your visit on the 11th (Sat): explore the world behind art at Museo de Arte Costarricense, examine the collection at Pre-Columbian Gold Museum, then get engrossed in the history at Jade Museum, and finally view the masterpieces at Galeria Namu. On the next day, take in the architecture and atmosphere at Iglesia Maria Auxiliadora, then pause for some serene contemplation at Santuario Nacional Nuestra Senora de Los Angeles, and then browse the exhibits of Riish and Toosh Afro Costa Rican Paintings.

London, UK to San Jose is an approximately 15- hour flight. You can also do a combination of flight and bus. Traveling from London to San Jose, you'll gain 6 hours due to the time zone difference. Prepare for somewhat warmer weather when traveling from London in July: high temperatures in San Jose hover around 31°C and lows are around 22°C. Finish your sightseeing early on the 12th (Sun) so you can take a bus to Manuel Antonio.
more less

Things to do in San Jose

The rainforest meets the sea at Manuel Antonio National Park, a small but scenic natural preserve on the west coast of Costa Rica.

On the 13th (Mon), explore the wealth of natural beauty at Manuel Antonio National Park, then surround yourself with nature on a nature and wildlife tour, and then see Off-Road Tours. On the 14th (Tue), you'll have a packed day of sightseeing: view the masterpieces at The Captain's Booty, get a new perspective on things with Boat Tours & Water Sports, and then kick back and relax at Playa Manuel Antonio.

For where to stay, more things to do, traveler tips, and other tourist information, you can read our Manuel Antonio road trip planner.

Getting from San Jose to Manuel Antonio by bus takes about 3 hours. Other options: drive; or take a shuttle. Cap off your sightseeing on the 14th (Tue) early enough to go by car to Monteverde.
more less

Things to do in Manuel Antonio

Monteverde is all about natural attractions, not surprising for an eco-tourism hotspot known for its cloud forests and rich diversity of animal life.

Start off your visit on the 15th (Wed): stroll through Monteverde Cloud Forest Biological Reserve and then view the masterpieces at Arte Jaguar Gallery. On your second day here, admire all the interesting features of Ecological Sanctuary, kick your exploration up a notch at categoryPhrases.alias.some_of_the_top_local_zipline_courses_and_adventure_parks, and then explore the world behind art at Chorotega Arts & Crafts.

You can drive from Manuel Antonio to Monteverde in 4 hours. Other options are to do a combination of bus and shuttle; or take a bus. Wrap up your sightseeing on the 16th (Thu) to allow time to drive to La Fortuna de San Carlos.
more less

Things to do in Monteverde

Get in touch with nature at Tabacon Hot Springs and Arenal Volcano. Museum-lovers will appreciate ChocoMuseo La Fortuna and Onirica Art Gallery. There's lots more to do: witness a stunning natural landmark at Ecotermales Fortuna, pause for some serene contemplation at Iglesia de La Fortuna de San Carlos, admire the sheer force of La Fortuna Waterfall, and let the river carry you with a rafting and tubing tour.

Traveling by car from Monteverde to La Fortuna de San Carlos takes 3.5 hours. Alternatively, you can take a shuttle. Wrap up your sightseeing on the 20th (Mon) early enough to drive to Granada.
more less

Things to do in La Fortuna de San Carlos 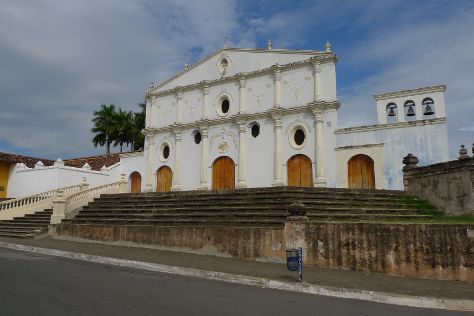 The lakeside city of Granada has the look and feel of a historically important economic and political center, with grand colonial architecture, a unified look, and many cultural attractions.

Kick off your visit on the 21st (Tue): take in the exciting artwork at Galeria Mi Camara Mi Mundo, pause for some serene contemplation at Iglesia de La Merced, pause for some serene contemplation at Catedral de Granada, then steep yourself in history at Palacio Episcopal, and finally see the interesting displays at Centro Cultural Antiguo Convento San Francisco. On the 22nd (Wed), you'll have a packed day of sightseeing: see the interesting displays at ChocoMuseo Granada, examine the collection at Mi Museo, then take in the architecture and atmosphere at Iglesia de Xalteva, and finally explore the world behind art at Casa de Los Tres Mundos.

Traveling by car from La Fortuna de San Carlos to Granada takes 5 hours. Alternatively, you can do a combination of bus and shuttle; or take a bus. Cap off your sightseeing on the 22nd (Wed) early enough to go by car to Leon.
more less

Things to do in Granada

A cultured and storied city, Leon attracts guests from all over the world, drawn to the second city's style, thriving intellectual life, and liveliness.

Start off your visit on the 23rd (Thu): see the interesting displays at Museo de Arte Fundacion Ortiz-Gurdian, visit Catedral de la Asunción, then pause for some serene contemplation at Church The Recollection, and finally steep yourself in history at Iglesia San Juan Bautista de Subtiava.

Traveling by car from Granada to Leon takes 2.5 hours. Alternatively, you can take a shuttle; or take a bus. July in Leon sees daily highs of 39°C and lows of 28°C at night. Finish your sightseeing early on the 23rd (Thu) so you can travel back home.
more less

Things to do in Leon